Following an appeal process, BPTW has secured planning approval for a scheme at Southgate Office Village in Enfield for client Viewpoint Estates. The high-density development will provide 216 new homes and 1,720 sqm of commercial space in central Southgate. The brownfield site of sub-standard 1980s office buildings and a multi-storey carpark required regeneration, offering the opportunity for the scheme to act as a catalyst for economic development in Southgate and raise the area’s profile within London, whilst delivering much-needed housing that respects local heritage. 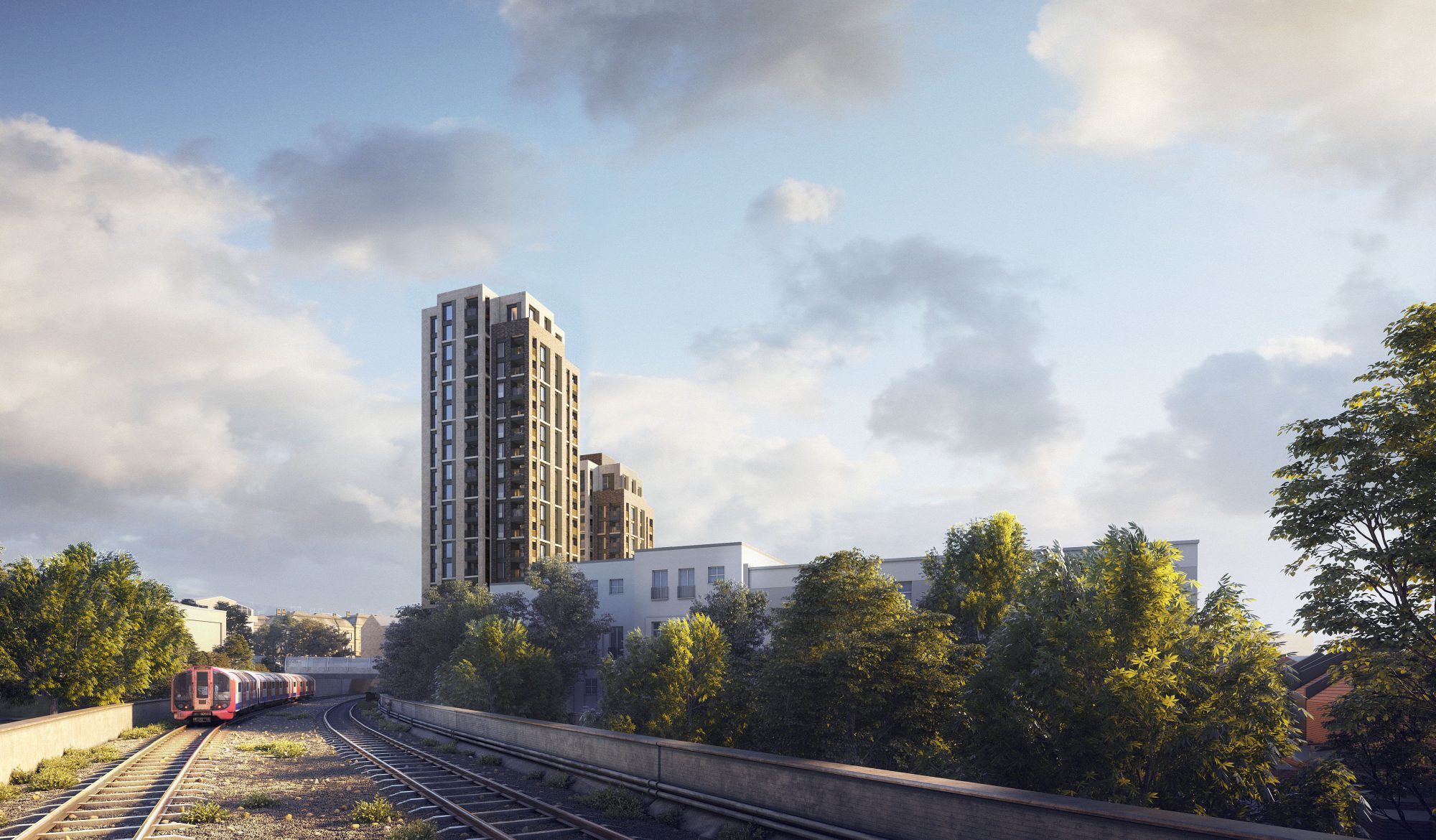 Adjacent to Southgate Circus Conservation Area which includes the Charles Holden designed Grade II listed Southgate Station, the landmark development is guided by the GLA’s requirement for increased density around transport hubs. In an arrangement of five buildings including three towers of up to seventeen storeys in height, the development’s urban form has been orientated to maximise natural daylight and create a connecting public space through the site that will greatly improve permeability in the area. The design has been tailored to ensure its form remains elegant from several key views across Southgate despite its height. BPTW overcame a myriad of site constraints, including the adjacent railway and a steep level change, by using the topography and prominent location to the development’s advantage. The design utilises a stepped massing to respond to the neighbouring low-density residential area and the higher density town centre location, seeking to unite both places.

Despite support for the application being received from key consultees including officers at Enfield Council, the GLA, the local Design Review and Historic England, local councillors and others had raised concerns about the development’s potential impact on the conservation area and listed station. Working alongside Holly Mitchell of planning consultancy Simply Planning and Christopher Young QC, the appointed appellant’s advocate, BPTW were able to reiterate the positive design qualities of the scheme at appeal, winning support for the proposal by evidencing that the development’s urban form has been sculpted and orientated to maximise natural daylight and retain a slender appearance  when seen from key views such as the conservation area. Inspector Paul Griffiths BSc (Hons) BArch IHBC commented in his appeal decision that ‘the proposal at issue while much taller than the station complex, would not seek to align itself architecturally with it, but would sit apart, as a well-designed complex in its own right’ and that ‘the architect of the proposal at issue has taken a conscious decision not to slavishly mimic the distinctive architectural treatment, and in particular the horizontal emphasis, of the station complex. The elevational treatment of the proposal is very carefully detailed, but sculpted rather than smooth, largely orthogonal, and vertically emphasised.’ 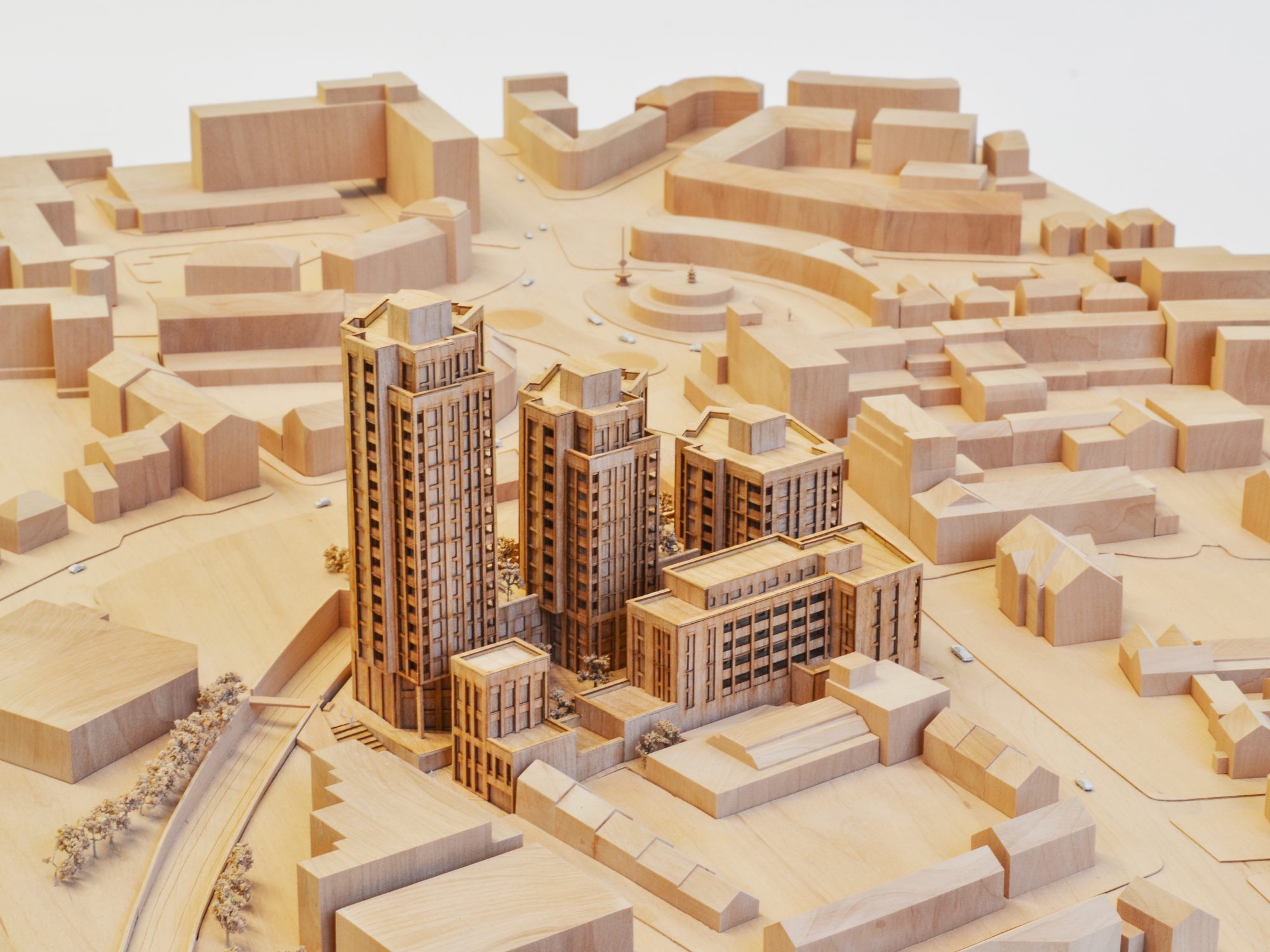 “Southgate Office Village provides a unique opportunity to contribute towards Enfield’s housebuilding targets and is a high quality scheme designed in line with the London Plan 2021. If we are to achieve our ambitious housing targets for London, key to this will be ensuring we can deliver enough new homes in London’s outer boroughs which, in the right locations, will require higher density, well designed mixed-use developments that can really strengthen local economies while preserving surrounding green spaces. We are therefore delighted to see the Inspector support the local authority officer’s original recommendation for approval after putting such significant work into this scheme. We are also pleased that the quality of the design and architecture has been recognised in the appeal decision. The approved design demonstrates BPTW’s ability to deliver contemporary housing of high density on highly constrained sites, providing much-needed housing that respects local heritage. The scheme will create a bold and striking new landmark that will act as a way finder to Southgate’s town centre and we look forward to seeing the development being realised.”

One of the key design principles was to create an east-west route across the site, resulting in permeability being greatly improved in the area, which was also positively commented on by the Inspector in the appeal decision: ‘The essential idea behind the scheme is to arrange a series of five blocks around a public route through the site connecting Park Road with Chase Road which allows for connection to the site of the Marks & Spencer store on Winchmore Hill Road, using the footbridge across the railway. Making the site permeable in that way seems to me a firm basis for the proposal.’

Alongside the commercial space and apartments, including 35% affordable and 10% wheelchair user homes, the emerging context will provide a community coffee shop, new children’s play space, amenity spaces for the residents and a pocket park for the Southgate community. In response to the inactive facades of the existing office buildings, BPTW’s design strives to create visually active office spaces at ground floor that open out onto the public realm and provide the opportunity to regenerate Southgate’s commercial offer. The new commercial units provide two types of office spaces – traditional offices and an office hub that accommodates a variety of modern working spaces. As a result, the scheme will have wider benefits on the local economy, whilst preserving the surrounding greenspace.

Arranged on the floors above the commercial units, new one, two and three-bedroom apartments benefit from striking views across the borough as well as a variety of private and communal amenity spaces designed to facilitate a variety of resident activities. To deliver improved sustainability credentials, the development utilises roof-level solar panels and a connection with Enfield Council’s Energetik network to reduce carbon emissions. It is also predominantly car free as a result of its central location within Southgate and good transport links. 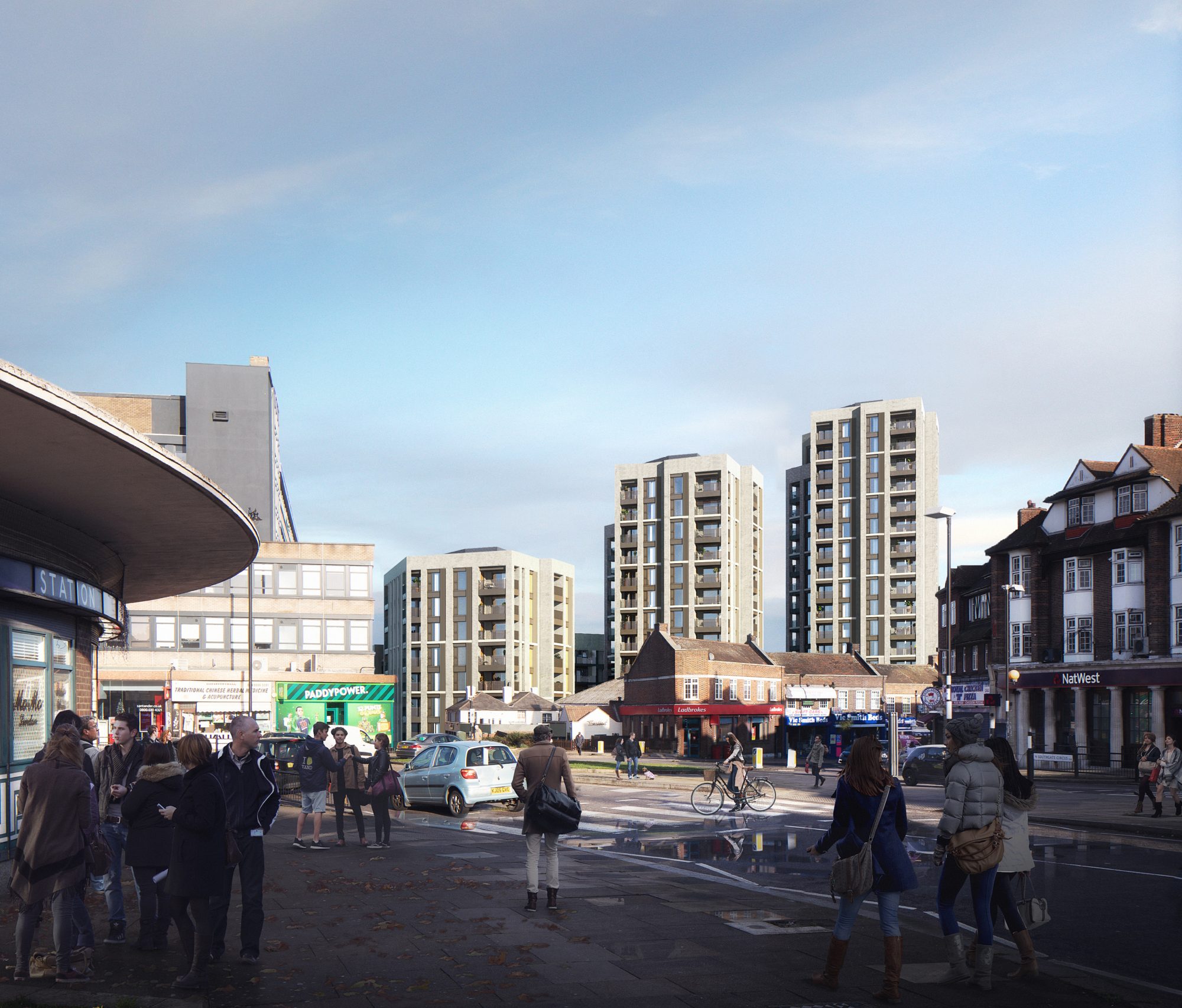 The trio of elegant towers use a hierarchy of proportions to create a balanced façade with a vertical emphasis. Informed by local noteworthy buildings, the façade design integrates two tones of complementary brickwork with vertical brick piers and secondary horizontal stone bands to create a framed, calm architectural backdrop to the listed station and conservation area. The hierarchy of windows and the visually open ground floor with marked entrances help to define the commercial uses from the residential. The tallest landmark tower has been carefully sculpted with recessed balconies to slim and define the massing. Contrasting brick tones in cream and grey that alternate around the tower further emphasise the vertical proportions and divide up the massing. Architectural richness is introduced through detailing such as reconstituted stone fluting and variations in brick bond and brick header details, along with areas of green brick tiles.

The detailed design elements were informed by considerable stakeholder engagement, including a pre-application process with LB Enfield, and meetings with the GLA and the Design Quality Panel which were fundamental in defining the architectural approach to the site. Consultations from a heritage perspective with the Conservation Advisory Group and Historic England informed the design process to ensure the proposal respects the setting of the listed station and conservation area. Additional stakeholders, such as TfL, were consulted to address development risks such as the proximity of the railway line to the site. The planning approved scheme is a result of a keen understanding of the site constraints and an appreciation of the local area to provide a design that enhances the commercial and residential offer within central Southgate.